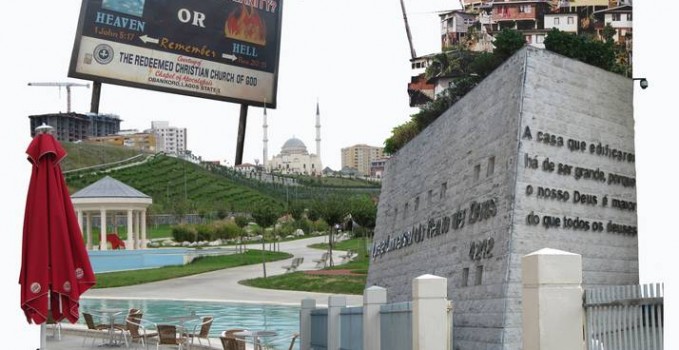 In Lagos, the largest Pentecostal church provides room for five times as many believers as the world’s biggest soccer stadium; a very own City of God is emerging on the outskirts of the metropolis. In Beirut, Islamist organizations are taking charge of rebuilding the quarters destroyed in the war and control the provision of housing. In Rio de Janeiro, movie theaters are converted into churches, while in Mumbai public spaces temporarily become stages for religious spectacles. Religious communities demonstrate their presence and occupy urban spaces via loudspeakers and posters, in motorcycle conveys or processions, through their own television stations or in cemeteries.

New religious movements are playing an increasingly important role in cities. They are transforming the urban topography, appearing as economic as well as political players, and not seldom replacing the role of the state—across all regions and religions of the world. At the same time, urban cultures are being permeated by new religious practices such as Islamic hip-hop or Christian Nollywood movies.

The international art exhibition the Urban Cultures of Global Prayers offers a differentiated view of the interrelations between urban development and sacred practices, between promises of spiritual redemption and social liberation. Beyond ideological debates on the “regained strength of religiosity,” it becomes evident in the works of the artists from twelve countries that big cities are also always places of religious innovation. The show particularly addresses the cultural and urban practices of globally active new religious movements, allowing viewers to experience the urban settings, strategies, and productions of meaning of religious players and communities in metropolises of the Global South such as Lagos, Mumbai, or Rio de Janeiro—but also in Istanbul and Berlin. The main emphasis of the exhibition is on the visual and media formats of photography, video installation, and soundscape.