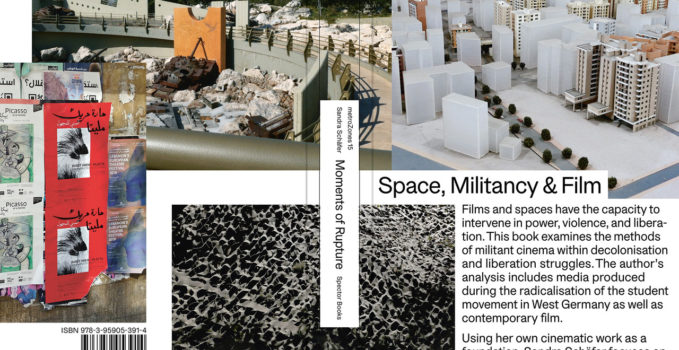 (→ deutsche Version) Moments of Rupture. Space, Militancy & Film by artist and lecturer Sandra Schäfer deals with films and spaces that intervene in the relationship between power, violence, and liberation. In her book, Schäfer examines methods of militant cinema within the context of decolonisation and liberation struggles. The author’s analysis includes media produced during the radicalisation of the student movement in West Germany as well as a discussion of contemporary film.

Using her own cinematic work as a foundation, Sandra Schäfer focuses on two projects undertaken by the governmental militia Hezbollah in Lebanon: the Mleeta Museum of Resistance in South Lebanon and the reconstruction of Beirut’s Haret Hreik district after bombing by the Israeli military in 2006.

How does Hezbollah use space and architecture to shift power relations? How do power relations manifest in architecture and influence memory and identity? In the process of her investigation, Schäfer examines different geopolitical contexts as well as her own position as an artist. The book also offers an insight into the field of conflict in Lebanon today.

“In her methodology of the ‘militant image’ Schäfer develops a strategy of self-positioning. At the same time, she dares to artistically intervene in Hezbollah’s landscapes — both the vertical reconstruction of housing and the horizontal panorama of memory — by dislocating objects, working with voids and silences, and using her own body and gaze as a sensor.” (metroZones)

The artist Sandra Schäfer works with film and video installations. Her practice explores the process of unfolding and rereading documents, images, spatial narratives, and performative gestures. Her works are often based on extended research regarding the margins, gaps, and discontinuities of our perceptions of history, art production, and political struggles in urban and geopolitical space.