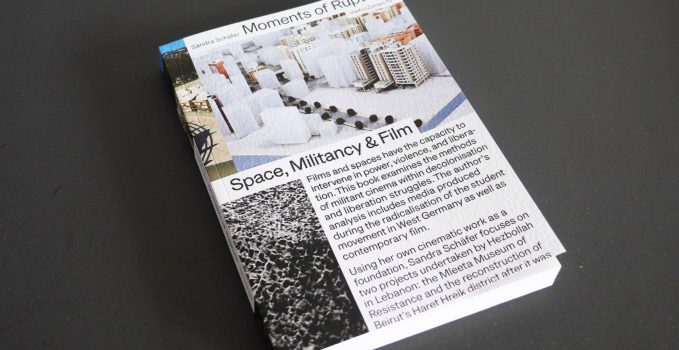 Films and spaces have the capacity to intervene in the nexus of power, violence, and liberation. Sandra Schäfer’s book Moments of Rupture. Space, Militancy & Film examines the methods of militant cinema within the decolonisation and liberation struggles of the 1960s and 1970s.

The author analyses contemporary film and the media produced during the radicalisation of the student movement in West Germany. Using her own cinematic work as a foundation, Schäfer eventually focuses on two „projects“ undertaken by Hezbollah in Lebanon: the Resistance Museum in the south of the country and the reconstruction of Beirut’s Haret Hreik district after it was bombed by the Israeli military in 2006.

How does Hezbollah use space and architecture to shift power relations? How do these relations influence memory and identity? In the process of her investigation, Schäfer examines different geopolitical contexts as well as her own position as an artist.

Sandra Schäfer presents her book in conversation with architect Joseph Rustom from Beirut.

Clips from her video installations “Mleeta” and “Constructed Futures: Haret Hreik” will be shown.