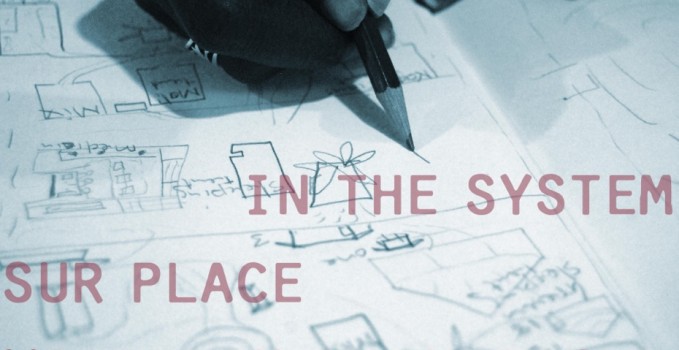 (→deutsche Version) How do refugees move in a city such as Berlin? How do they organise to get through? Where do refugees take spaces, what are the images refugees create of themselves?

In cooperation with the artists Sarnath Banerjee, Christian Hanussek and Diana Lucas-Drogan as well as numerous further actors metroZones has developed a series of Mappings in three parts, which—in different scripts/handwritings and with diverse acentuations —broach the subject of urban refugee experiences. That includes the issues of rights and spaces, of everyday situations and states of exception as well as the agency of individuals and collectives. What does it mean to recode a city?

The drawings were preceded by a research in three working groups, in which refugees and other actors were interviewed about their experiences and reflections, memories und desires, including sketching their own memories. The exhibited mappings are the attempt of a – in the broadest sense—(carto)graphic translation of the narrative, spatial and discursive constellations emerging in the process.

In a kind of trilogy they narrate the different dimensions of that what we call “Refugee Complex”: the image series in the system revolves around deprivation of rights, dailylife tactics, survival strategies, and forms of resistance; the collaborative mapping sur place reconstructs urban seizing of space and everyday self-organisation in circumstances of exception; the multilayered notation Resumption Rehearsal retakes the issue of a self-organised centre of refuges in the city.

Mapping is not just a matter of documenting. We act on the assumption that linkages emerge in the process of drawing and reading and that objects/things appear, which would not be readily discernible by other means, such as photographic reconstruction, textual narratives. Mapping is a process, so this is not about the map. In fact a very ambiguous one: Who benefit from mapping as data collection? And what shall be made visible and located—and what not?

Berlin Field Recodings will be up for discussion in two phases:

On 8 November 2015 the results, drawings and methods of each research team have been discussed with the project participants in an internal workshop in the foyer of the Gorki Theatre.

On 21 November 2015 the project participants will present and re-read in public the three exhibited mappings in the foyer of the Gorki Theatre (12–15 h) [displaced to Studio Foyer by the directorship]. This will be followed by a Round Table (15-17 h) with additional guests to discuss the issue of mapping and cooperation as well as the matter, which new spaces may emerge from these processes. Invited interlocutors are Christoph Schäfer (Planbude, Hamburg), Peter Spillmann (MigMap, Zürich/Berlin), the exhibition collective We will rise, Muhammed Lamin Jadama and Amdi Niang. Moderation: metroZones

Participants of Berlin Field Recodings are: