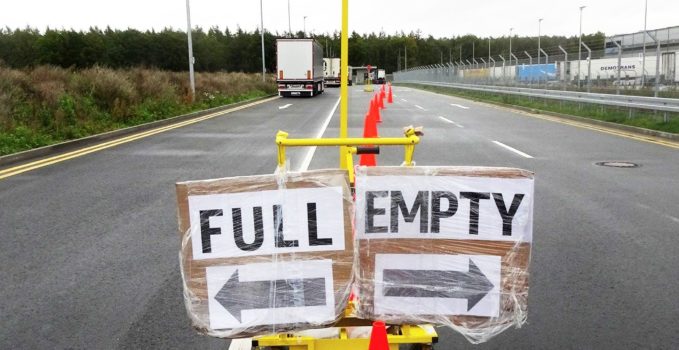 We have nothing to lose but our supply chains

A project within the exhibition ‘Silent Works. The Hidden Labor in AI-Capitalism’ reemerging under lockdown as the Berliner Gazette Winter School 2020, Haus der Statistik, Berlin, 7-28 November 2020.

Mapping along Amazon (→ deutsche Version)
Around Berlin, but also in the city itself, the Internet-based shipping service provider Amazon is steadily expanding its network of delivery centers. South of Berlin, BER8 was recently opened, right next to the Schönefeld motorway junction between the airport, Cottbus, Poland and Potsdam, but so far difficult to reach via village roads. A large, fenced-in logistics hall stands in the middle of a field, secured with a kind of moat like a castle fortress. Waiting in front of the entrance, but also in the more distant motorway service areas, truck cabs with Polish and Baltic license plates are ready to deliver their blue Amazon-Prime trailers with Krefeld license plates for unloading, or to pick up newly loaded trailers.

A young Ukrainian driver who arrived the evening before, now cooks his lunch on the side of the road, and waits until the evening to load transport goods in order to take them to Paris, Mannheim and Krefeld. Plans of deployment and route changes are communicated to him via e-mail and cell phone by a company in Lithunia, where he also has a bank account in Euros.

A contractor from Amazon is currently setting up a technical checkpoint at the exit. He says would himself never buy from Amazon and prefers small stores. He also does not understand the routes the goods take all over Europe with drivers contracted from afar. A sign-board advertises three more logistics hubs that are due to be built on the overgrown field next to the Amazon area. In the distance, an Ikea sign marking the Waltersdorf branch of the furniture discounter towers above the fields.

These logistic landscapes are interlinked. In a cramped industrial area in Marienfelde, trucks squeeze through a narrow road between allotment gardens and a parking garage and unload their goods into a large and obscure box. Close by and ant-like, hundreds of white, mostly privately rented delivery trucks and cars are loaded by men with a migrational background with goods, before swarming into Berlin on delivery runs.

In the Krausehöfe in the centre of Berlin, a tiny sign indicates that Amazon Berlin is located here. A newspaper article reports that about 500 people are to work in this massive building. A security guard controls the entrance, a camera eye is mounted next to the bell.

Digital goes concrete gold
Under the keyword ‚tech-urbanism‘, the exploitation context of tech and the city is recorded. This is materialized in the form of buildings, displacement, business models, data hoovers or “bullshit jobs” (David Graeber).

First, online shopping drives the stores into ruin, then it takes over the buildings: An Amazon Prime warehouse for hourly delivery was set up in a former electronics supermarket on the Ku’Damm in Berlin, and in the USA, Amazon occupies so-called dead malls in order to convert these shopping areas, which have become superfluous, into conveniently located ‚fulfillment centers‘ for the delivery of goods ordered online. The Karstadt department store at Berlin-Neukölln’s Hermannplatz, seen as a historical icon, is to be converted into a hybrid of shop-in-shop, Amazon logistics warehouse, co-working space, re-use center and living space against fierce resistance from the local residents. At the same time, the Amazon group is founding a chain of stores where it will be possible to buy groceries „seamlessly“ (easy and without cash registers) without personnel and with the most accurate digital tracking of the goods withdrawal: the user perceives no interruption in the flow of a technically mediated experience.

Tech-Lash
There is increasing resistance against the tech industry, for example the successful protest against Amazon’s second headquarter in New York called HQ2, or against the ‚Google Campus‘ and the Zalando branch in Berlin-Kreuzberg as well as agaist the ‚Amazon Tower‘ in Berlin-Friedrichshain as part of the ‚Mediaspree‘ concept. The Berlin protest refers to the urban divisions in the Bay Area around San Francisco and Silicon Valley, where many residents of the technopolis were forced onto the streets, in both senses of the term. The campaign Berlin vs. Amazon not only tries to prevent the construction of the ‚Amazon-Tower‘ at the Warschauer Brücke, but also tries to combine the fight against the gentrification accelerated by the spatial expansion of tech companies with the struggles of tech workers.

The Techworkers’ Coalition gathers all classes of techies, from programmers to pickers in ‚fulfillment centers‘ on the outskirts of the metropolises, including bicycle delivery services. Many of those taking part in the Berlin vs. Amazon campaign work in the IT sector themselves and thus argue with their knowledge from the inside. Through Make Amazon Pay, the campaign has established connections to Amazon workers in storage hubs all the way from Leipzig and Bad Hersfeld to Poznan. Especially in Poland, about 20,000 people work at Amazon, mostly on precarious, temporary employment contracts; however, in Poland you cannot order goods with Amazon at all. These workers are used to supply the German market, bypassing German strikes or traffic jams.

Sneaking around
There are two of us on the road, via WhatsApp in voice mail contact with our home office in Mecklenburg, where drawings are made after the stories and descriptions. These drawings, together with sound files, photographs and memories, result in a ‚Mapping along Amazon‘.

See also the leporello on display in the exhibition